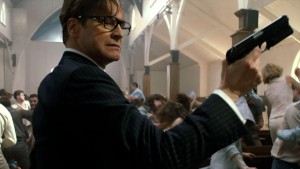 As part of my birthday festivities yesterday, my wife took me to see Kingsman: The Secret Service. This was one of those cases of going into a movie fairly blind. I vaguely recall a teaser trailer from a few months ago, and I had recollections of it being based on a comic book (it is). But that was about it.

Man was this a fun movie! In a lot of ways, it feels like Simon Pegg made a James Bond movie, with not quite as much camp as something like Hot Fuzz. Samuel L. Jackson gives a very unique performance as the film’s baddie, and Colin Firth plays a part that usually goes to the likes of Liam Neeson. As a gentlemanly mentor / ass-kicker, he was perfectly cast in the role of Galahad. 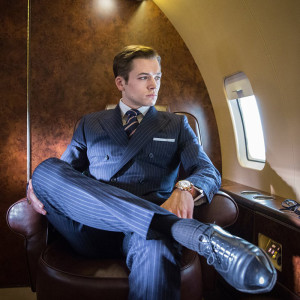 The real star of this movie is relative newcomer Taron Egerton. His character, Eggsy, drips charisma, nails the emotional beats in the movie, and adds a wonderful sense of levity to an otherwise over-the-top action/comedy.

There are a number of lengthy fight sequences in this movie, and I find them some of the best I’ve seen in recent years. Every since Batman Begins, fight scenes have become jumpy, far too zoomed in, and difficult to track. Kingsman manages to have very intense, intimate fight sequences that are very easy to keep track of. The choreography is brilliant, especially the church scene, and incredibly visceral.

The movie just does a great job of moving from exciting action set piece, to comedic bits, to great character moments. Fans of British actors will find plenty of fun cameos, plus a great, albeit brief, appearance by Mark Hamill.

This movie really came out of nowhere for me, but I just can’t express how much fun it was to watch. Definitely make some time to check it out!